View source
watch 01:36
We're Getting Mutants in the MCU - The Loop
Do you like this video?
Play Sound

The Tropian Republic or Den Tropiske Republikken is a nation located in Oceania in the Solomon Island chain, east for Papua New Guinea / Las Islas Filipines. Its national day is April 15th, 2021, it was founded thursday April 15th 2021, but they celebrate it every thursday.

The historical leader of the TTR is QU3STI0NABL3 wich founded and defended Tropia in all the wars although he was not in every fight, QU3STI0NABL3 Spawned in the world spawn in the end of Earthpol V2 and layed down in Turkey before V3 wuld start. In V3 QU3STI0NABL3 went to Spain and was to start Barcelona before Mingus (QU3STI0NABL3s partner) said that they shuld move the carrabien, then they created Babajan, a town in Guadelope wich the second day they was there they got treatened by The Carrebien Union to join them, the third day The Carrebien Union merged into The United States, but somehow The United States had the same claims as The Carrebien Union so they started trying to get Babajan to join their nation, They refused and refused, soon one person from Panama Lucas B77 reached out and wanted to help, because they've also gotten treathened by the US for the town, then QU3STI0NABL3 and Mingus got Ultra, Limed Green and TheFox, then they went to the Solomon Islands and founded Tropia.

The First And Second Tropian War

April 18th the war of Marine Guinea or The First Tropian War started because General Limed Green cought DecentDemon in hacking on the earthpol server and reported it to Chairlatte, but then Demon told Thiccccc bois what happned, he got mad NOT because Demon was hacking, it was because LIMED SAID TO CHAIRLATTE THAT HE WAS HACKING, so Thicccccc bois started the siege, In the start of the war Tropia got an ally to help them in the siege, it was China, China was to become Tropias best ally, there was many battles, many died, ca. 6 one of them was thiccc bois, he lost his gear also, in the end of the siege Tropia got that much points that Thiccc bois needed to call in Danish suport for the siege, Noah, XLnuggets and Biggest Yoshi started to get to the banner, but the day after Tropia got 10k point so Thicccc bois got Biggest yoshi to Siege Chicken Island, (the mayor mistake they made was to NOT siege Tropia City, because it was the biggest and moast traveled to city in Tropia, but they still sieged the smaler cities, untill Tropia won, and Papua New Guinea canceled the siege. The part with Papua was the second Tropian war, not much happened there.

April 22th the Third Tropian war happened because P13M4N wanted some Tridents from Limed and TheFox, but they wuld not give them to him, so he started a siege, There was one bloody war between Limed, A german friend of Limed and P13, Limed lost two setts with armor, but after that battle, P13 offered a peace treaty, so they took it, because no one culd help them in that siege, This is the treaty they signed: Former Leaders 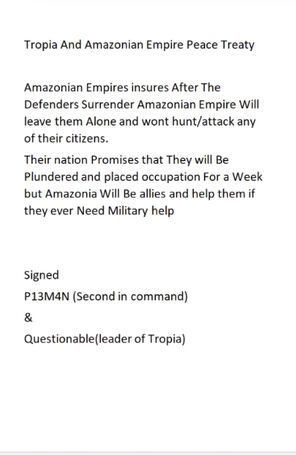 Florida (if they return)