Deutschland (also known as German Reich) is an empire located in Central Europe (within the territories of Germany, Austria, Scotland, Ireland, Norway and Switzerland) with dominions in Cornwall (England) and Berbery (Algeria). This last one having a temporary outpost on Southern France (Nice).

Since November 2021, Deutschland has been the biggest rival of SPQR, the other great nation in Europe, also controlling pieces of Asia and some lands of the real life Roman Empire. Despite the rising tensions, not many encounters happened, but the romans sieged Lugano (a german town in Switzerland) in late November. Throughout the month of November, the German Empire extended its borders to Switzerland, Poland and even Slovakia.

In 4 December 2021, Poland was created and Wroclaw casually left Deutschland while the town of Dusseldorf in Western Germany officially joined the empire. In the same day, the Kingdom of Bavaria agreed to merge with the condition of keeping its autonomy over the claimed lands. Thus, the Kaiser grantykied established a network of kingdoms within the empire, first naming DrCope as the King of Cornwalls and Cerzius as the King of Bavaria.

In 5 December 2021, the German Army invades Hungary and the Battle of Budapest happens, ending in a strategic victory and a military defeat. Peace is then signed with SPQR, so Laibach is ceded to them and Kazakh is handed to Deutschland.

In 4 December 2021, the Kaiser grantykied had established a territorial organization based on four kingdoms and two overseas duchies.

Notes: Bold means the capital of that kingdom or duchy, Italic means the town is not controlled yet claimed as part of the territory and Underline means the town's lands are claimed and managed by another town.

As of 20 December 2021, the Reich has an established system of ministers which help the Kaiser in different tasks:

This is the hierarchy of the Empire:

The emperor, konigs, archduke, dukes and barons are all part of an Imperial Council where important decisions are taken. There is also a Senate only for the emperor, kings and archduke.

As of 20 December 2021, the Große Armee (Great Army) is led by NimbKied, being composed of the following ranks: 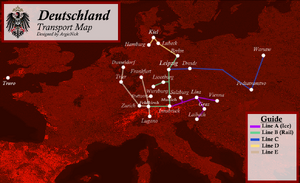 Due to the continuous state of war, the German Council is not focusing on developing the infrastructure, but there are plans to make it a more relevant topic as a good iceroad network would definitely have benefits on the nation. The Line A is complete and the Line B is partially functioning.

In parenthesis, the lands that the original town claimed and are now considered as a separate town. Outposts for mining are not considered as settlements.